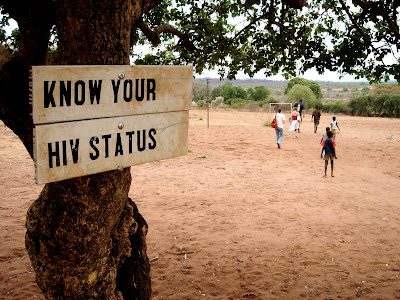 In the 1970’s the world perception of the virus was that it was common among Gay men and drug users. Through out the 1980’s and the 1990’s it became a disease typical among sex workers in the third world. In the year 2000 dawn of the new millennium, it became evident that infection rates were high among people living in Sub- Saharan Africa especially women.
The World Health Organisation (WHO) and United Nations programme on AIDS (UNAIDS) estimate that there are currently 33 million people in the world living with HIV, there is an estimated 24 million people living with the disease in Sub-Saharan Africa, 61% of those infected are women. In South Africa and Zimbabwe 75% of young people infected are girls between the ages 15-24.

Factors that have contributed to HIV increase are cultural taboos and unequal power of relationship; it is difficult for women to choose their sexual partners and how often they have to be intimate. Women are unable to make decision in the use of condoms, which are instead made by men.

Women are more vulnerable than men due to gender inequality, lack of legal rights, education and understanding of the issues, coupled with the dilemma of under age sex, early marriage, polygamous relationship and female circumcisions. Women are at risk to the infection through lack of knowledge about the contamination process, further alienating them from actively taking part in farming activities and eventually leading to a devastating effect on their children.

UNAIDS urges governments to get the right laws and policies in place ensuring that women are educated and empowered through economic power by keeping the land, homes and assets when their husband dies. In South Africa violence against women especially rape and drug dependency makes women liable to sexual exploitation and vulnerable to infection.

The issue of Debt payment is a major problem in the fight against the disease, according to Aid Charities and NGO’s there are one million people living with HIV in Zambia, the government currently spend 2 US Dollars a day per person on health care compared to 24 US Dollars on servicing external dept payments.

In Sierra Leone it is common practice for Sugar Daddies to offer school girls material goods and cash in return for sexual favours often exposing them to the disease, usually with the consent of older family members who are powerless to act due to poverty and ignorance.

WHO policy statement states that screening options should focus; firstly on people who are showing symptom of the disease e.g. tuberculoses patients. Secondly, antenatal screening focuses on the impact of women’s decision to be tested during pregnancy. Thirdly, compulsory screening is mandatory for providing safe blood. Fourthly, voluntary screening, involves a rapid test facilities and timely result confirmation coupled with wide spread assurances of counselling support and protection from discrimination for those found to be positive.

Screening is very important as it will allow governments to support agencies by planning effectively and apportion budget to the appropriate sector of need e.g. Health Care. By screening for HIV, governments will be able to address the cumulative impact of the disease by providing care facilities for orphans; governments can keep people with the disease productive members of the community by providing free antiretroviral treatment and nutritional food. Governments can reduce the annual toll of new infection by enabling people in their communities to protect themselves, through the use of condoms and bring health care support directly to patients. With screening governments will be able to seek synergy and build on economies of scale through early screening. Screening is vital to HIV positive women, who can protect their babies from the disease by offering formula milk; the impact of this is financially and requires constant supply of clean water and fire wood to ensure sterile feeding.

The downside to screening is that it can lead to political instability, brain drain, low saving rate and an increase in social support caused by vast numbers of people unable to work due to ill health. Governments may be unable to collect taxes from these groups of the population leading to social disintegration, poverty, starvation and famine. The resulting effect is a reduction in population size, breakdown in family composition, decline in life expectancy and an increase in child and infant mortality. Finally there could be an increase in the cost per head per man hour due to a reduction in man power.

Providing screening and cheap ant viral treatment will not address the current spread, but rather, governments will have to reverse policies on gender inequality, forge closer relationship with NGO’s and private entities, encourage community based support groups, eliminate poverty by provide good education, clean drinking water and good nutritional food. Failure to provide these basic human requirement risk women becoming an endangered species and the fate of human race will remain uncertain.

Promote your Page too

What does the writter do ??

Selected broadcasts from the writer